On December 19, 1997, Kathleen and Noel Smith purchased a dilapidated old rooming house on Broadway. It took great vision (and a very helpful local bank) to renovate, restore and reopen this 1870 building as Saratoga Arms a sixteen-room hotel in 1998. As we reflect upon the past 14 years, we are thankful for the changes that our Saratoga Springs Hotel has brought into our lives.

Although the past 14 years have brought many changes to our Saratoga Springs Bed and Breakfast, those that have remained constant are the most important–Noel still makes the breakfast each morning, Kathleen remains the quintessential social engineer and Judy takes great pride in making every guest’s stay a special one.
Thanks to all of our guests, the Saratoga Springs community and a hardworking Saratoga Arms family for making the first 14 years such a success. Just imagine what the next 14 years will hold for Saratoga Arms. 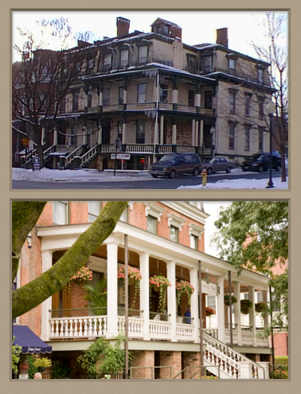