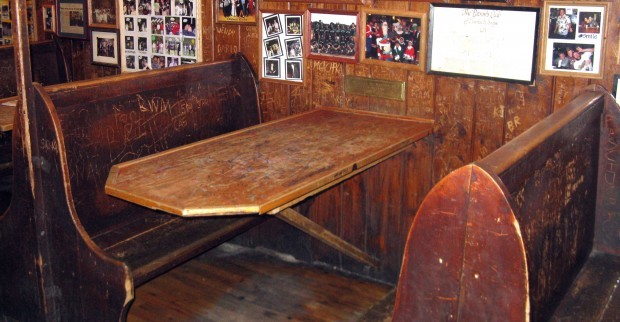 Photo by Tom Dimopoulos from the PostStar

For years upon years Saratogians have proudly laid claim to the origins of Don McLean’s famous 1960’s hit song American Pie….go ahead, I’ll wait while you hum along and then try to get that brain worm out of your head.

The story was that Don McLean, after a night of imbibing in local “spirits” had written the lyrics to the song on a napkin in a small Caroline Street bar called the Tin & Lint. So convincing was this tale that the owners of the bar had a plaque made to commemorate the booth…the seat…the very location was it was purported to have happened.

The song was later said to have been first performed at a Small Coffee house, Caffe Lena, owned by a local Saratoga Springs legend in her own right, Lena Spencer. Don McLean did have a soft spot in his heart for Lena Spencer, who had encouraged him early on in his music career, and he went on to perform American Pie and many more songs over the years in that tiny coffee house. But laying claim to the first public performance of the famous song is alas, also not true. According to the legendary performer, the song came to life in Philadelphia, PA; the closest Saratoga Springs can come to that is a one-way street named Phila Street. American Pie was first performed at Temple University and while many still regard Caffe Lena as a Temple of sorts, it must give up that claim to fame.

The American Pie brain worm still lives in the heads of many Saratogians who stubbornly refuse to believe that the seat in the corner of that little bar on Caroline Street in Downtown Saratoga Springs, NY was not where “drove my Chevy to the levee and the levee was dry” sprang to life one not-so-sober night in the 1960’s.

Book a stay at our Saratoga NY Hotel and mention this blog and we will send you home with a fresh homemade American (Apple) Pie.